“Class War” Note: This leaflet was distributed in Boulogne-sur-Mer by the comrades of “La Mouette Enragée” [The Enraged Seagull] on the occasion of the demonstration of October 5th, 2021 “against the pension and unemployment insurance reforms, against precariousness and for the increase of wages”. This “inter-union day of strike” is obviously only an umpteenth counter-fire aimed at putting out the flames of proletarian revolt…

We have been struggling for months to get rid of this bad dream, this accomplished separation from our fellow human beings under the influence of exceptional laws that have become the rule, all this gives us a glimpse of the purpose of capital for the times ahead. We were already “tested, traced and isolated” before, in the workplace where we are exploited day after day as well as in the maze of job search, at school or in the supermarket. “Social distancing” is the essence of the total and decadent world of the commodity; a universe tormented even to madness by its own contradictions. The yellow vests had sensed it, restoring mutually the links that are needed to launch a class counteroffensive equal to the stakes that stand before us.

The bourgeoisie wages war on us

The Covid epidemic and the political repercussions that followed were by no means inevitable. The commodification of our lives has been accompanied for years by the dismantling of health system over which the workers have never had, by the way, any control. The bourgeoisie is now preparing to finish it off and dismantle it in order to put it on the market soon. As for scientific expertise, the extravagant show performed by the bourgeoisie (with the argument of authority over the shoulder) has completed to shed light on the particular interests it supports in reality.

Accused of negligence in health care, the power at the top of the State seized the chaos that it alone had unleashed as an opportunity to replay the only card left in its sleeve, that of National Unity. Under the label of the Council of Defense and National Security, a political-military coterie gave itself the power to juggle fear and guilt, infantilizing the population under a deluge of measures all more liberticidal than the others. As usual, it was the inhabitants of working-class neighborhoods who were the first to be stigmatized. From the repression of solidarity practices in deprived areas to the permanent state of emergency; from the curfew to the Global Security Law or the one on Separatism; from the strengthening of the repressive arsenal making France the country in Europe where the police is the strongest, to the so-called Sanitary Pass, the epidemic offered the State a territory-wide field of experimentation in terms of social control

All over the planet, the dreams of capital announce our nightmare

However, it would be simplistic to denounce this policy as the exclusive creation of Macron and his government. It is part of a broader and international context; it strikes down de facto any search for a sovereigntist, “patriotic” or nationalist solution.

We bet that the economic recovery touted by the official communication will only be a short-lived catch-up phenomenon. It is coupled with increased productivity in the conditions of exploitation, which are even worse than before the epidemic. The latter gave a new boost to the now uninterrupted restructuring of capital. Incipient or partially developed tendencies have found in home confinement and generalized control a fertile ground in which to thrive, exacerbating imbalances, competition and instability on a global scale. The American company Amazon has announced a tripling of its net profits in the first quarter of 2021. In France, during this period, the situation has worsened for at least one worker out of ten, as the Ministry of Labor itself acknowledges; the psychological health has seriously deteriorated for many of us, particularly under the impact of teleworking, for which, ironically, great relocation waves are soon to be announced…

The brutality of labor leads to radical but still isolated reactions among workers, which nonetheless carry within them its critique in action. In the United States, in England and even in France, the phenomenon of the resignations from jobs is spreading, affecting tens of thousands of workers, if not several million as it occurs on the other side of the Atlantic. Although ambivalent and individual, these reactions nevertheless affirm that an existence worth of living will never become used to the daily abuses of management, as well as to performing servile and repetitive tasks for the production of services or goods as useless as they are harmful to our personal and collective equilibrium.

It will soon be two years since the blackout on social mobilizations was imposed, while in the meantime poverty has continued to spread. How can this be explained, when nearly 30% of the population of this country can no longer afford healthy food and eat three meals a day? In just one year, the number of applications for social assistance [RSA] has increased by 14% and almost 10 million people live on less than one thousand euros a month. Since October 1st, the government has reduced the amount of benefits paid to the unemployed under the pretext of “motivating” them to look for a job, and the clerks of the employers’ union are only waiting for a window of opportunity to finish off the pay-as-you-go pension scheme.

In the meantime, the presidential election circus has taken over from the health soap opera which, in the long run, is struggling to attract substantial audiences. Only the mobilization in the summer against the Pass managed to disturb somewhat the authorities, fearing the replay of a mobilization whose ins-and-outs would be out of control. In the end, this was not the case, because however aberrant and disturbing they might be, the protest against social control and the occupation of the street were too often left to the control of reactionary groups and other lunatics of all kinds, except in a few rare places. However, it is in this context, where factions of the petty bourgeoisie are giving voice – while naively hoping to escape the whirlwind of capitalist contradictions – that we must fight. It is up to us that a clear class discourse of international solidarity echoes in their ears. Not on “social networks”, but in the streets, at work, in the neighborhoods and wherever it is still physically possible!

Here as well as elsewhere, the bourgeoisie and its State only intend to negotiate our surrender and submission to the capitalist chaos into which they are rushing us. And something in the air leads us to believe that, decked out in their misleading “democratic legitimacy”, they will not hesitate to use any means, without exception, to achieve this… The need for a new horizon for humanity is therefore acute, but this hope will not come from the ballot box, neither here nor anywhere else, neither tomorrow, nor ever.

This political requirement puts the necessity of the Social Revolution

back on the agenda! 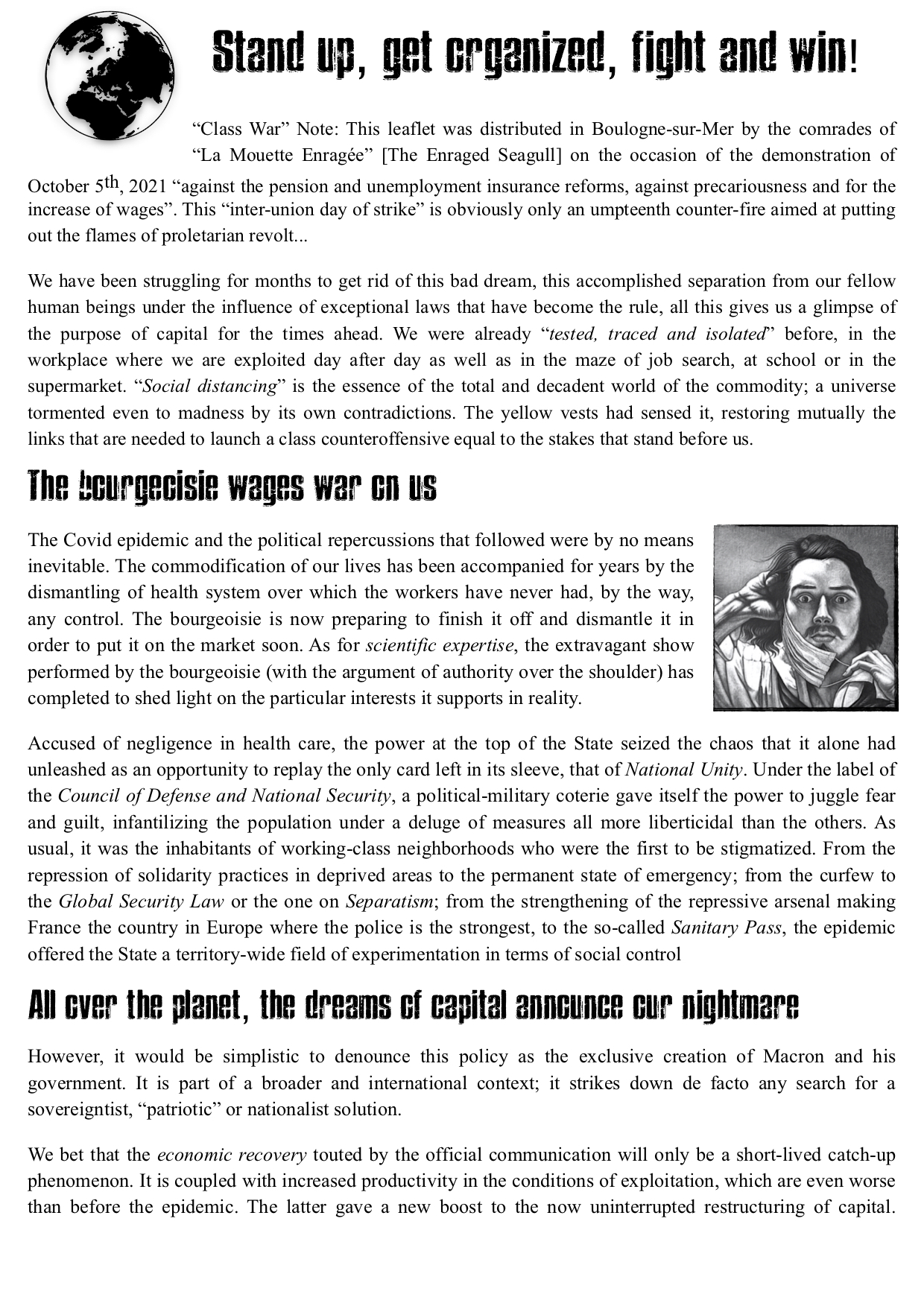 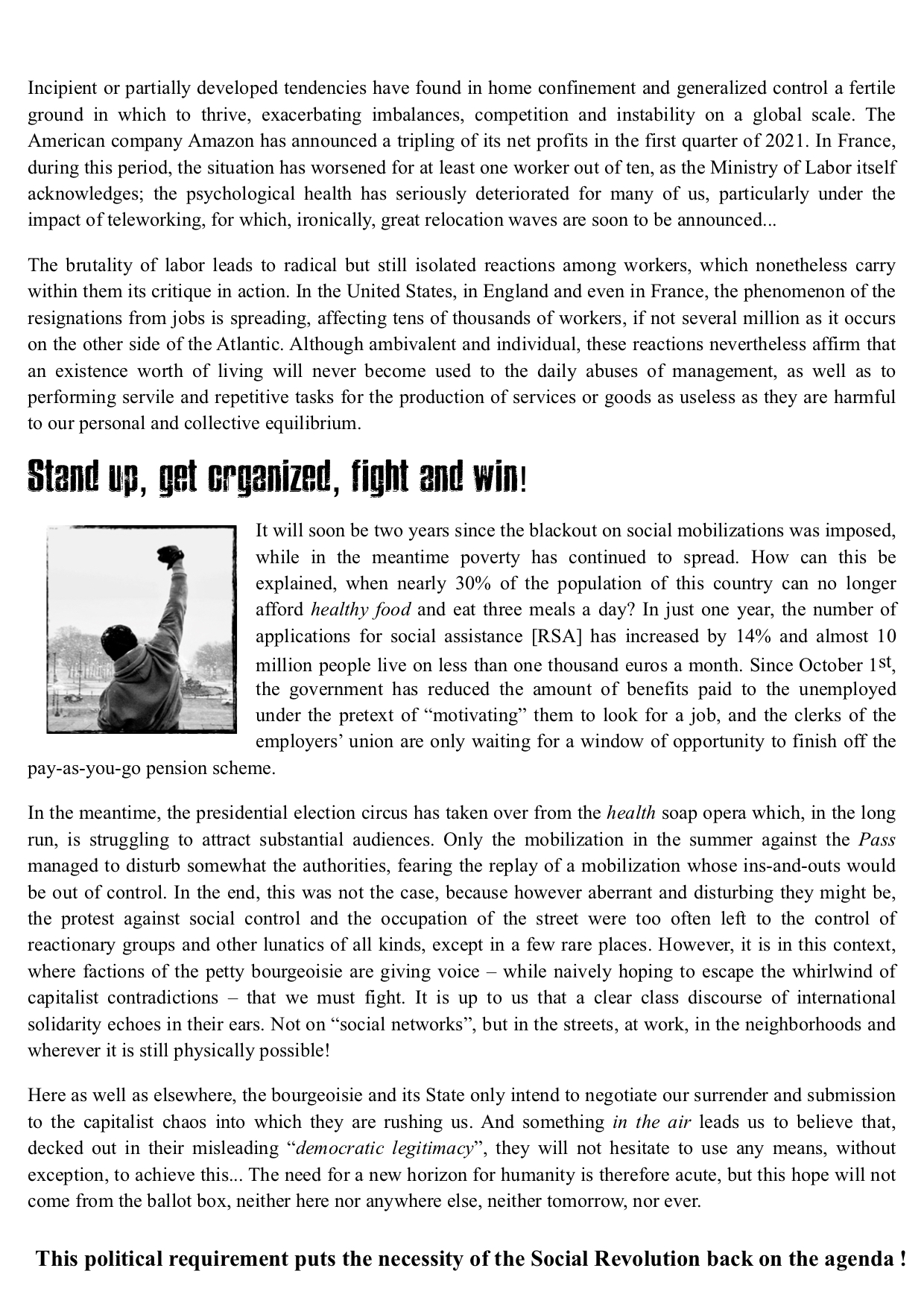